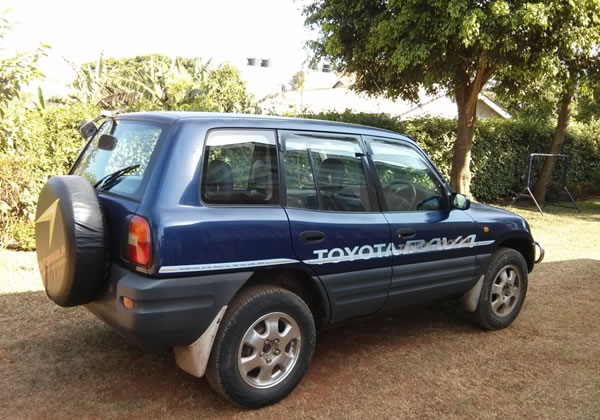 In the car rental business in Uganda, this is one of the most hired out rental car. Most of the people that hire vehicles from rental companies in Uganda are budget travelers so they find the Toyota Rav4 the ideal rental car for their expeditions. The Toyota rav4 is normally hired at a price of 40$-50$ per day and its fuel consumptions is one an economy stake.

The Toyota Rav4 is a semi sport utility vehicles made by Japanese based automobile company. Due to people’s urge for a crossover or compact SUV car, Toyota came up with the RAV4s in 1994. There are so far three generations of RAv4s that have come out that is the first generation of 1994-2000, the second generation of 2000-2005 and the last generation of 2005-2012. These vehicles normally come out in a both mini and large versions as the mini one has three doors the two front doors and the emergency door at the back and the large one has five doors that are four doors on the front and one emergency back door. These vehicles are largely 4 wheel drive vehicle but also they are few that are two wheels. These vehicle come in both Manuela automatic gear transmission form.

Most of the rental companies in Uganda have the older models of Toyota rav4s (1995-1999) since these models where made to maneuver through the raged roads that prevailed in the world in the 20th century as most of the countries were still less developed. Uganda being a less developed country hiring out older versions of the Rav4 is an intended fate.

These vehicles normally carry up to four people. They are best for few people taking a safari or a couple. The vehicles are economy vehicle as their fuel consumption is relatively low and this makes them among the common cars hired in Uganda.